Djibril Sidibe is using AS Monaco and AS Monaco are using him. That’s the picture painted by L’Equipe on Thursday, with the French newspaper explaining Sidibe has seen Monaco as a ‘quick springboard to the Premier League’.

With Monaco being a selling club, they’ll be fine with that, as long as they make a good profit on the player they bought from Lille last summer. The full details of what Monaco paid Lille aren’t clear, but it’s thought to have been a package worth around €15m.

As for Sidibe’s destination in the Premier League, L’Equipe speculate that Arsenal could relaunch a move for the player having tried to sign him before Monaco. The Frenchman’s estimated price is €25m, and Monaco already have a replacement in their ranks.

Sidibe has played 20 games at right back for Monaco this season and 10 games at left back, doing both roles equally well. 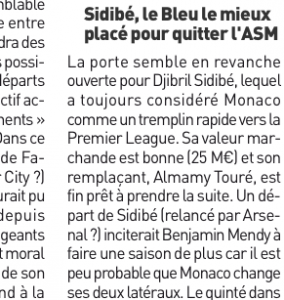 The 24 year old would be a great option for Arsene Wenger’s Arsenal squad, walking into the left back role and putting at least some pressure on Hector Bellerin, which could push the Spaniard to improve further.

With rumours once again swirling around Bellerin, and the player doing little to kill them, Wenger having a good right back option is wise… even if he’s at first parked at left back.