This week, reports from the Portuguese media claimed FC Porto have turned down an offer from Leeds United for the transfer of Otávio.

Some outlets even said a bid had come from Aston Villa, and then others insisted that the attempt was made by the Elland Road side.

Then today, we’ve seen Portuguese newspaper A Bola claiming Leeds could return with a new offer, this time worth €40m, to try to convince Porto of a deal.

And it turns out that, according to outlet Jornal de Notícias, neither the Whites nor Aston Villa would be able to convince Otávio to leave the Dragons and join them. 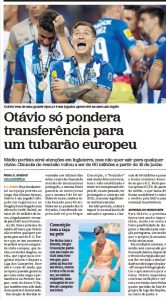 The newspaper writes that Otávio is only moving from Porto this summer to join an ‘European shark’, which means he’d leave for clubs who give him the same chances of fighting for titles as the Dragons.

Jornal de Notícias makes it clear this is not the case of Leeds, whose big achievement last season was staying in the Premier League, nor Aston Villa, who’ve been linked to the player as well.

With outlets disagreeing regarding Otávio’s release clause, the report claims to have confirmed that it indeed stands at €60m, as the change to €40m was only valid until the 15th of June.