Already strengthening the right-hand side of their defence this January with the arrival of Valentino Lazaro on loan from Inter, Newcastle United are now focusing on their left-hand side.

Jetro Willems, on loan from Eintracht Frankfurt, started the season well, but a cruciate knee ligament rupture suffered in the 1-0 win over Chelsea put an end to his season.

That has left Steve Bruce with just Matt Ritchie in the role, since Paul Dummett is also out with an Achilles tendon rupture, meaning help is required.

According to Corriere dello Sport, Newcastle have turned their attention to Napoli’s Faouzi Ghoulam, who wants out of the Serie A club, but their first approach was rejected by the player.

The newspaper explain the Magpies wanted the Algeria international on loan, but the defender only wants to leave permanently if he is to swap clubs this window. 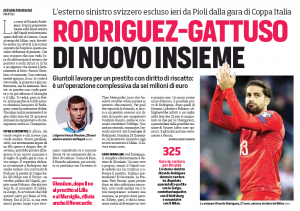 That means Newcastle might have to put money on the table if they want their man, but it depends on what their plans are with Willems, as they have an option to buy him from Frankfurt.

If they want to sign him permanently, it makes sense to only want Ghoulam on loan for the time being.