Home Europe Player ‘trying to understand’ if Newcastle opportunity open to him – Could...
SHARE

Cagliari star Nahitan Nandez is ‘trying to understand’ if he can secure a move to Newcastle United this month.

That’s according to Tuttosport, who say talks have been held about a potential move to St James Park before the end of the window.

The Uruguayan has been keen to leave Cagliari for some time but saw a move to a big club like Inter Milan fade away in the summer.

Now it is Torino who are pushing for his signature, but at this moment in time, there is a ‘stalemate’ between them and his current club, which has led to a ‘postponement’ of talks with his agent.

That’s because, according to the newspaper, Nandez hopes to ‘not only earn more money’ but also wait and see if he can still secure a move to a big club like Napoli. 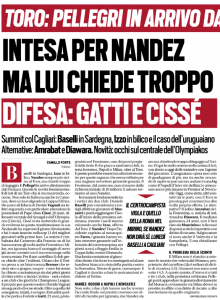 Alternatively, he also wants to see if he can ‘cash even more money’ in the Premier League as Newcastle have shown an interest in him.

They’ve held talks about a potential move, and Nandez wants to see if it is possible, with Torino ‘pressing’ to convince him to accept their offer in the meantime.

The nature of Newcastle’s interest isn’t mentioned, nor how far their talks have gone, just that they are interested in a potential move.

And that has caught Nandez’s attention, although they need to offer him a nice pay rise if they are to get a deal done.