On Wednesday morning, Marca reported ‘agreement is total’ between the two clubs.

Later that day, we covered claims from Mundo Deportivo explaining the 23-year-old was absent from Real Madrid’s training session.

The Spain international picked up an injury while on international duty this month, but the report suggested this was not the reason for him being left out of training.

It’s claimed the final details of the agreement between Real Madrid and Spurs were closed on Wednesday. José Mourinho’s side will pay €30m, and as per the agreement, Los Blancos will have a €40m buy-back option, valid for the next two years.

Reguilón now needs to undergo his medical checks with the north London club, for which he already travelled to England yesterday. 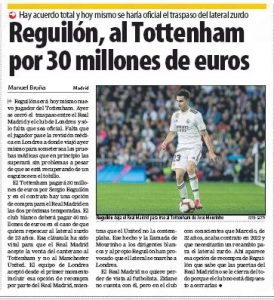 The newspaper reports the player will ‘pass’ his medical, even though he’s recovering from an injury.

Once this is completed his transfer will be made official, and according to the report, the deal would be announced on Thursday.