Today is one of the days when several Portuguese outlets bring different takes on the Bruno Fernandes transfer saga.

With several reports about the case coming from Spain, Italy and England on Saturday, some newspapers only had to dismiss or confirm what has been said in the past 24 hours.

This is the case of Jornal de Notícias. They claim there’s no such thing as an agreement between the clubs or a scheduled medical at this stage. They add these things ‘are not close to happening’.

However, according to the newspaper, Bruno Fernandes has told people close to him that ‘the transfer to Old Trafford is going forward well’. 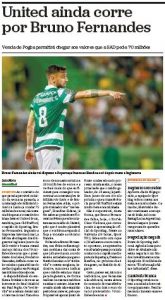 A Bola just takes the claims from England saying Manchester United could offer £65m, and add that although it doesn’t reach the price demanded by Sporting, it will be enough to convince the Lions to sell.

They also compare the claims about Bruno’s supposed salary at Old Trafford, and say it would be five times what he makes at Alvalade.

And Correio da Manhã, which is the newspaper who most encourages this transfer, continues to bring more of the same.

They say Bruno Fernandes could be having his farewell match for Sporting today, against Valencia. And they also claim that agent Miguel Pinho is in England to bring an offer from Manchester United, since the Red Devils are ‘closing the siege’.