Fanatik report Fenerbahce’s young attacking midfielder Ferdi Kadioglu has told his close friends that he wants to continue his career with the Turkish club, despite the reported interest from Derby County.

It’s been claimed Derby manager Phillip Cocu, who signed the youngster when he was in charge of the Turkish club, is keen to see the Dutchman in his team next season.

However, according to Fanatik, Kadioglu wants to remain in Istanbul even though he could have the chance to be reunited with Cocu at Derby County

Kadioglu reportedly said he’s not paying attention to transfer rumours and his main goal is to serve Fenerbahce for the foreseeable future. 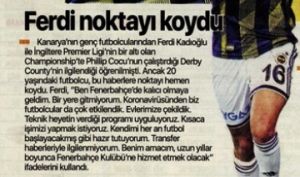 Fenerbahce paid €1.4m to NEC Nijmegen to sign Kadioglu in 2018, and the 20 year old has been impressive when called upon.

The Dutch U21 international has made 22 appearances for the club this season, scoring four goals and providing three assists. His contract with the Turkish giants will expire at the end of June 2022.