Antonio Valencia is turning 35 years of age today. To celebrate the birthday of one of Ecuador’s greatest stars, the local media is running many stories on him.

Newspaper Diario Extra features a very interesting interview with the footballer, where he had a lot to say about the peak of his career, which was playing for Manchester United for a decade.

Most of Valencia’s answers were pure poetry, starting with him saying what comes to his mind when he thinks of the Red Devils.

“I don’t think, I just feel my heart beating, I think that’s how it always worked and that’s why I gave my all in every moment of the ten wonderful years I lived with my dear Red Devils.” 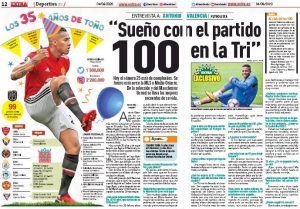 The player revealed that many compatriots from Ecuador used to visit Manchester to watch him.

“I had many visits from Ecuadorians in Manchester, it was very nice to receive them, they are ambassadors of our country around the world and to meet people far from homeland is to feel more at home and proud of our Ecuador.”

And when asked how many Manchester United jerseys he has at home, Valencia said: “I have many that I keep with love, but what I have the most are memories that fill my soul and with which I can always say: it was worth all the effort.”

Antonio Valencia joined Manchester United in a £17m deal from Wigan Athletic back in 2009. In ten years at Old Trafford, he made 339 appearances for the club, winning the Premier League and League Cup twice, and the FA Cup and Europa League once.

He returned to Ecuador to play for LDU in 2019, and has been a free agent since his contract expired in June. Despite being linked to several Latin American clubs in the past few weeks, he’s now expected to move either to MLS or the Middle East.