Jese Rodriguez is in Madrid this week, travelling with Las Palmas to face his former club tonight. Having flown from Gran Canaria, where it’s around 20c, Jese is set up to kick-start his new career.

It could all have been very different had Aitor Karanka got his way and signed the player for Middlesbrough. Karanka worked hard trying to get the deal over the line, and even went public with his desire to sign Jese on loan from PSG.

Jese wasn’t keen at all, insisting that he returned to his native Las Palmas. Middlesbrough almost certainly tried the transfer for too long and continued with effort when it was clear Jese didn’t want to move there/ 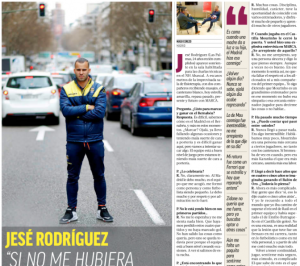 PSG were keen on the Middlesbrough move as it meant more money for them, but had Karanka succeeded then Boro could have found themselves with a player sulking until the end of the season, when he’d look to move once again.

Karanka’s perseverance was probably due to the relationship he shared with Jese at Real Madrid and, speaking to Marca, the Las Palmas player has touched upon that.

Asked about his relationship with Jose Mourinho at Madrid, Jese said: “We spoke very little, Mourinho was closer to certain players personally, not so much with the youth players. Yes we joked occasionally, but Karanka was the one who was closest, who most did that work.”

Middlesbrough likely dodged a bullet that Karanka was trying ever so hard to throw himself in front of. Jese was never going to succeed if he’d been forced to sign for the club and Las Palmas was where he saw his career getting back on track.

So far, Jese has played four games since his move and Las Palmas have lost them all. He’s missed repeated good chances and has spoken about feeling a pressure to produce.

Tonight would be a good time to start.