Takvim report Fenerbahce’s on-loan winger Victor Moses doesn’t want to rush his return from injury as he wants to head back to Chelsea in the new year and play under his former teammate Frank Lampard.

It’s reported the Nigerian ‘is not forcing himself enough’ to play again for Fenerbahce because he’s planning a January return to Chelsea.

The 28 year old was injured in the opening game against Gazisehir Gaziantep FK, and since then he’s missed all of Fener’s six league games. 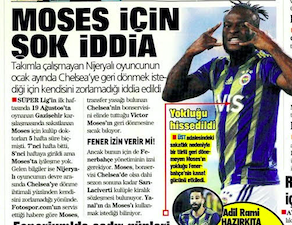 With the club’s other natural winger Garry Rodrigues also sidelined with injury, Takvim report Fenerbahce manager Ersun Yanal wants Moses in his side as soon as possible but the Chelsea loanee is ready to defy him as he’s not keen on making an early return.

It’s reported Yanal wants to keep him in his squad as the Turkish manager believes he could be a very important part of the team, with the Yellow Canaries looking to win the Super Lig title for the first time in five years.