The Spanish media, especially the newspapers, have been calmer on Alvaro Morata to Manchester United than their counterparts in England and Italy. Supposed days Morata was set to fly to Manchester have come and gone, often replaced by new days, which have also come and gone without anything actually happening.

Cristiano Ronaldo’s circus has provided a distraction, and perhaps an excuse, for the deal not being done yet. It’s easier to say that Ronaldo having a strop has stalled Morata’s move, rather than explain the reporting was way ahead of actual events… should that have been the case.

Florentino Perez has this week said very clearly to Onda Cero that he’s had no offers for Morata and doesn’t want the player to leave, rubbishing any idea of the move being imminent.

Of course, he could be lying, but it’s perhaps not to his benefit to do so. Saying there had been offers, but he’d rejected them all so far because Madrid value the player very highly would have been the more feather fluffing response.

On Wednesday Marca round up Perez’s words and go to a list of what they say is Real Madrid business. On Morata, it’s stated: ‘He remains firm in his idea of changing teams. The striker has not changed his mind and is still waiting for Manchester United to make a 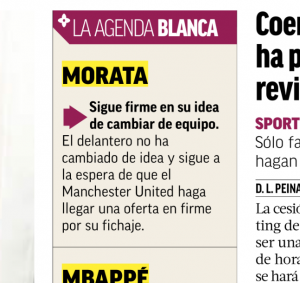 firm offer for his signing.’

It was supposed to be all agreed the week before last, then early last week, then before the player’s wedding at the end of last week. And now? Things are pretty much stalled until Manchester United firmly push forward.

Is that anything to do with Cristiano Ronaldo? It would depend on the slant one wants to put on things.

Maybe the next distraction will be Robert Lewandowski…