At the start of this month, Sportbladet suggested Brentford had managed to get ahead of Newcastle United, Leeds United, Wolverhampton Wanderers and Crystal Palace in the race to sign Jens Cajuste.

It was also stated the Bees’ bid was accepted by FC Midtjylland, but they had to sort out personal terms with the player to get the deal over the line.

The 22-year-old is still with the Danish side, but he’s one of the players who could leave the club before the window closes, according to Ekstra Bladet.

It’s claimed the Sweden international has ‘spoken’ to Rennes, the Tyneside club, Leeds and Thomas Frank’s side, but it’s ‘not yet decided’ where he will end up next.

The newspaper follows it up stating that ‘it is not up for discussion that he is gone’ when the window closes.

Ekstra Bladet say Midtjylland are hoping the midfielder ‘can be sold’ for 100m Danish kroner [€13.5m], without mentioning whether Leeds or Newcastle have made an offer.

SVT Sport in Sweden interviewed the player last week, when he was quizzed about the reports linking him to various clubs.

“It has been an interesting summer for me with a lot of rumours and talks. It is no big news that I feel ready for a new step. The amounts are completely crazy, but at the same time nice to know that you are valued so highly. I take that as motivation to work even harder,” Cajuste said.

With the window set to close on Tuesday, the Midtjylland man admits it’s hard not to think of the market. 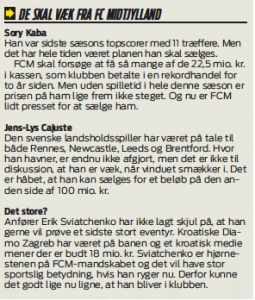 “I’m trying not to think about it. But it’s impossible not to do so. You keep track of the days and count down the hours. At the same time, I try to stay focused,” he explained.