We at Sport Witness are probably going to miss Lucas Piazon, a man who got involved in so many transfer stories in this decade.

The Brazilian spent nine years belonging to Chelsea, getting involved in countless loans, and has now finally agreed a permanent move to Portuguese side Braga.

Piazon spoke to the local media during his presentation at his new club, and the continuous spells he had in the past few years were obviously a topic in the conversation.

The winger acknowledged that he could never find his form in most club due to the short time he’s spent there, and now hopes to find a new stage of his career.

“The feeling of being here is great”, said Piazon (via O Jogo).

“I spent my whole life linked to a club and being able to leave and sign for a big one in Portugal is something that makes me very happy. Braga are a club who give players a lot of visibility by doing good campaigns. Being here will be very important in my career.” 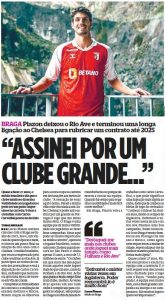 “The clubs where I stood out the most were those where I played for over a year, cases of Fulham and Rio Ave. I think the more time I stay at the club, the better. Sometimes spending only one year at a club is complicated for the player to adapt, be it because he arrived at the end of the transfer window or because he took long to get into the team. When there’s time to gain stability it’s easier to do better.”

Piazon joined Chelsea on a €7.5m move back in 2012. He only had three appearances for the Blues in these nine years, as most time was spent on his loans at Malaga, Vitesse, Eintracht Frankfurt, Reading, Fulham, Chievo Verona and Rio Ave.

He now signed a four-year deal with Braga.