On May 11th, we covered claims from France that Watford and Newcastle United are keen on Remi Oudin.

L’Equipe explained he’s been given the nickname ‘Robin van Persie’ by teammates, because he knows where the goal is and has a good accuracy record.

Both Premier League clubs were said to have made their interest known already, and it was believed Reims could pick up around €14-15m for the attacking midfielder.

Then, on May 21st, The Sun published an exclusive saying: ‘Watford have £7m transfer bid for Reims’ Remi Oudin – dubbed new Van Persie – rejected. Hornets and Newcastle eye the French striker after his superb season but his Ligue 1 club want £10m for the 22-year-old.’

Now the player has been speaking to Le Parisien, and was quizzed on interest, but not from Watford or Newcastle.

The French newspaper put it to Oudin that Lille and Nice are keen on his services, and a transfer has been valued at €10-15m.

He’s clearly happy with the attention: “At first it’s nice, but I try not to pay attention. They manage it for me.”

Then when asked about his career, he gave a clear hint a move away from France could be on the agenda in the future: “Later, it will be a goal to go abroad to discover another 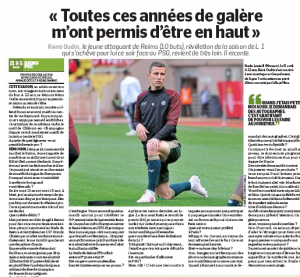 culture and another football.”

If Oudin’s words mean he’s not keen on leaving the country this summer, then Watford will have to work on both the offer and the player’s wishes.

There’s been no coverage in France of the claimed bid.