Vicente Guaita is being linked with a Getafe exit strongly in the Spanish media, with Crystal Palace seen as his destination.

On Sunday Mundo Deportivo reported Guaita wants ‘to try his luck’ in English football, and Getafe would look to replace him with Kiko Casilla from Real Madrid.

Marca carried that on by saying ‘everything indicates’ Crystal Palace will be the goalkeeper’s destination, and whilst they mention Watford it’s not very strongly.

Watford have been more linked by the English media than the Spanish, which is perhaps a suggestion the story is coming from the club.

That’s not to dismiss Watford, or even Besiktas who are also linked, but the transfer to 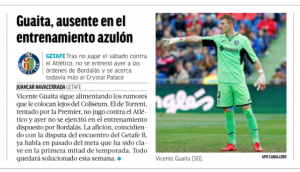 Marco Silva’s side isn’t the most covered in Spain right now.

In Marca’s Monday edition it’s explained Guaita skipped training on Sunday, and whilst the hint is he’s missing because of an impending transfer, neither Crystal Palace, Watford, or any other clubs, are linked in the newspaper edition.