Home Europe Player set to ‘head to Liverpool’ – Transfer being seen as a...
SHARE

On Sunday evening, the Bayern Munich midfielder put in another good performance as his team achieved Champions League glory. Winning 1-0, thanks to a goal from Kingsley Coman, Bayern broke PSG hearts in what could have been Thiago’s last match for the German club.

Bayern have publicly accepted that Thiago wants to leave them this summer. Liverpool have been the club most linked, with it feeling like Thiago had picked Jurgen Klopp’s side out as his next destination.

His desire for the move to Anfield has appeared stronger than Liverpool’s will to get a deal done. That said, when a player of Thiago’s level is keen to join you, it’s probably not a good idea to completely dismiss it.

After initially denying there was even interest from Anfield, media close to Liverpool then changed that slant. There was interest, just no desire to pay the €30m Bayern are asking for. 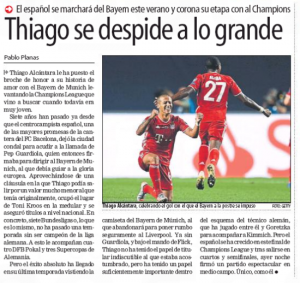 Mundo Deportivo have it differently, and in their Monday edition the Catalan newspaper state Thiago will ‘head to Liverpool’, as if it were a matter of fact.

Given it’s a Catalan media source, there’s every chance this is coming from a source close to the player.