On Wednesday, the idea that Eric Bailly could be heading to Milan was growing, and Thursday sees him enticed by a move to Italy.

That comes from Tuttosport, who report that the defender ‘says yes’ to leaving Manchester United and heading to the Serie A club, but that doesn’t mean a transfer will get done.

It’s pointed out that both Bailly and Abdou Diallo are ‘the hottest names’ on Paolo Maldini’s list, and ‘there would have been an opening’ from the player’s end regarding a move in January.

However, ‘the right fit between the clubs must be found’, with Gazzetta dello Sport adding a bit more about that in their report on the matter.

They state that on Wednesday afternoon ‘contacts between Milan managers and intermediaries of the operation did not lead to substantial progress’. 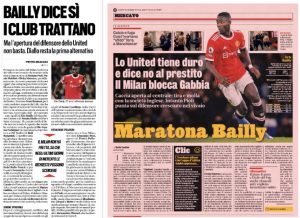 The ‘clear intention’ from Milan’s end ‘is to take home this engagement only with the loan formula, and with no definitive commitment’.

As was to be expected, Manchester United aren’t all that keen on that and ‘are determined to collect as much as possible immediately’.

Milan, however, ‘don’t want to be entangled by the skirmishes of the Red Devils’, meaning ‘the original idea of a loan remains without a shadow of a rise’.

They’ve even made it clear to United that if they don’t accept, they will ‘change objective’ and look elsewhere.

One thing is certain, though, and that’s the fact Bailly ‘remains Milan’s favourite’ for the role.