The rumour has been kicking around in the Italian sport media for a while now, but this one feels like it has more to it. Given Carlo Ancelotti’s appointment at Goodison Park, there’s been an urge to link half of Serie A with the club, especially midfielders.

Gazzetta’s Sunday edition states Inter Milan have received an offer in recent hours from Everton, for Vecino’s outright purchase. Previously reports had talked of a potential loan move with a purchase option.

The amount of Everton’s offer isn’t reported, although it’s stated Inter want €20m. They may go a little lower, or accept part of the payment as bonuses, considering Vecino hasn’t really hit it off with Antonio Conte. 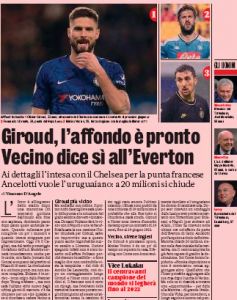 As for the player himself, he’s ‘said yes’ to the potential move, according to Gazzetta’s headline. They go on to explain he’s pleased with the idea of signing for Everton.

That had been mentioned a couple of days ago, when it was stated Ancelotti’s presence could be key.