Georginio Wijnaldum was much loved during his period with Liverpool, and was largely wished well despite his difficult exit from the club.

The Reds had wanted him to sign a renewal, but no agreement could be found. The midfielder looked close to signing for Barcelona as a free agent, however, that move hit several bumps in the road and PSG swooped in to get the Dutchman.

Things started off well for Wijnaldum but he now finds himself out of the starting picture for Mauricio Pochettino. The player has given several interviews in recent months in which he’s spoken of difficulties behind the scenes at Liverpool, suggesting things are much brighter in Paris.

That no longer seems the case, and, again, he’s shown he’s not afraid to talk to the media about the situation.

Currently away with the Netherlands national side, Wijnaldum has been quoted by De Telegraaf as saying: “This situation is very difficult for me. Because I’ve played at almost all my clubs so far and it went well everywhere.

“I was really looking forward to this move from Liverpool to PSG and then this happens. 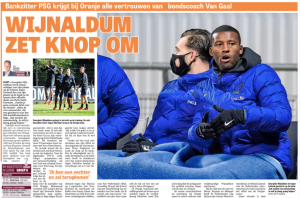 No, I have not discussed it with the coach. I’ve only started a few games on the bench and I’ve only been with the club for two months. I am a fighter. That’s how I want to come back.”

Things can again change quickly, and whilst there’ll still be some sympathy at Liverpool for Wijnaldum, that’s probably diluted somewhat after the comments of recent months.