Newcastle United initially signed Mikel Merino on loan deal from Borussia Dortmund in the summer of 2017.

A few months later, the Magpies signed the midfielder on a permanent transfer and contracted him to a five-year deal. However, that made no difference as the 23-year-old left the Tyneside club and completed a switch to Real Sociedad last summer.

Catalan newspaper Mundo Deportivo sat down for an interview with the Spaniard and asked him if any of the players have impressed him since he arrived at the La Liga side in 2018.

“I knew everyone. Yes, I was impressed by how prepared the kids in the academy are. Neither in Dortmund nor in Newcastle did I have the feeling that the homegrown players were so prepared. Here they come and they’re already up to the task,” Merino explained.

During his time with the Premier League club, Newcastle promoted Paul Dummett, Rolando Aarons, Daniel Barlaser, Freddie Woodman, Jamie Sterry and Adam Armstrong to their first team squad, during the course of the 2017/18 season.

Dummett is a regular for the English side, while Armstrong has already left the club. The rest of the players are still associated with Newcastle and have been sent out on loan this summer. 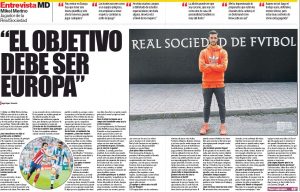 That’s not to mention Sean Longstaff, who has come from the Newcastle ranks and caught the eye of Manchester United.