Morgan Schneiderlin has been speaking to French newspaper L’Equipe about his move to Everton and the impact he’s had there. Since leaving Manchester United during the January transfer window, Schneiderlin has found his feet again and has pointed out that Everton have also improved.

That will come as no surprise to Schneiderlin, because he was expecting himself to have a big impact upon Ronald Koeman’s team, telling L’Equipe: “This is not arrogance but I knew from the start, on arrival, I was going to have an impact on this team. Because at Manchester, I was still doing intensive training, along with great players. And there, I had a personal physical trainer with whom I worked hard after practice. But it is true that in my first matches with Everton, I was a little less from the 70th minute onwards.”

L’Equipe are clearly as impressed with Schneiderlin’s Everton impact as the player seems to be, and they asked if he’s become essential for Koeman’s side: “There was clearly an improvement (with Everton) since the winter transfer window. Is it directly related to my presence? I do not know, I let others say. What is certain is that I like it here. After two weeks at Everton, I had the impression of being at the club for months, I was so quickly given responsibilities on the pitch.” 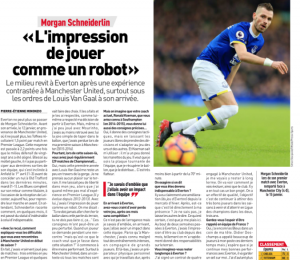 Perhaps surprisingly, given that Schneiderlin only joined the club in January, L’Equipe asked if he plans staying at Everton for long: “I signed a contract for four and a half seasons. After that, in football, you never know what can happen: when I committed to Manchester United, I could see myself staying there long term.

“We will see how I and the club change. Whatever happens, there’s a good project. We have a quality squad, the goal is to continue to attract top players in the coming seasons and land in the Champions League in two, three years.”