After a six-and-a-half-year spell at Arsenal, Nacho Monreal left the Gunners and completed a switch to Real Sociedad.

Prior to his return to Spain, multiple reports indicated that Unai Emery wanted to utilise the 33-year-old against Tottenham Hotspur, but the defender decided against featuring in the north London derby to avoid picking up an injury.

Three days ago, the La Liga side agreed a deal with the Europa League runners-up for the former Malaga man and the latter is now tied up to his new club until 2021.

After completing his move to Sociedad, Monreal was presented to the media on Monday.

On July 8th, we carried a report from Mundo Deportivo, who explained La Real have been chasing the fullback for the last three years. The player explained the change of manager at Emirates blocked his exit from Arsenal last summer.

“In my head for weeks there was already the possibility of coming here, and a few days ago we agreed and here we are,” Monreal was quoted as saying by AS.

“Last year, let’s just say we couldn’t come to an agreement, because it was Emery’s first year. He was blunt from the first moment saying I wasn’t going out. 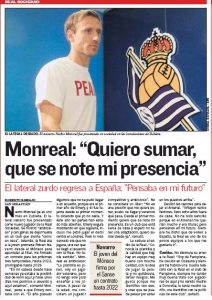 “And this year the parties have been more open. Emery kept insisting that I go on, even asked me to play the derby against London.

Arsenal already have a replacement in the form of Kieran Tierney, who arrived at the club from Celtic in August. He is currently on the sidelines and is expected to be a regular once he regains full fitness.

Claim Burnley said to have offered €28m for target – Could...