There’s some interesting claims from A Bola on Saturday regarding Moussa Marega finally moving to England.

It’s the striker’s dream to play in the Premier League and last summer he narrowly missed out on a move to West Ham. Having been linked with around half the clubs in England’s top flight, A Bola are certain this is the summer he’s moving.

The most interesting part of the claims is dismissing Wolves and Aston Villa reports which have emerged in recent weeks.

They then state ‘according to information already received by the footballer himself, the next stage of the career will be played in English territory and particularly at West Ham.’

That makes it sound like a source close to Marega has told A Bola the player thinks he’s off to the Hammers. 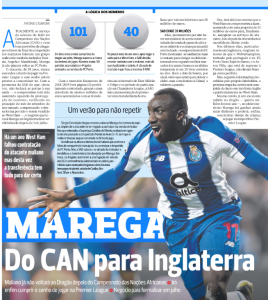 And to add to that claim, it’s stated West Ham are ‘waving a €35m offer’ at Porto.

Given what happened last summer, it would be no surprise if this one fell to pieces again, although the report does sound optimistic.

The 28 year old scored 21 goals last season and added 11 assists, the previous campaign it was 23 goals and 8 assists, so there’s certainly some consistency there.