Tottenham Hotspur take on Royal Antwerp in the Europa League tie later today and the Belgian club’s striker, Dieumerci Mbokani has admitted Spurs showed interest in him in the past.

The 34-year-old, who had loan spells at Norwich City and Hull City between 2015 and 2017, also revealed Liverpool wanted him a decade ago.

Ahead of the clash between the Jupiler Pro League side and the north London club, local newspaper Gazet van Antwerpen interviewed the striker.

When asked if he could have played for a club like Tottenham early in his career, he said: “Yes, that could have been [possible]. I was at Anderlecht [2011 to 2013], Tottenham even showed interest. I was never able to talk to teams, but I know they followed me closely then.”

Mbokani has scored over 40 goals and registered 20 assists in all competitions since joining Royal Antwerp in 2018, and he will be hoping to score and help his side beat Tottenham on Thursday.

The DR Congo international spent three years at Standard Liège before joining AS Monaco in 2010.

Prior to joining the Ligue 1 side, the Reds came forward to acquire his services. The African attacker admits he was wrong to pick Monaco over Liverpool. 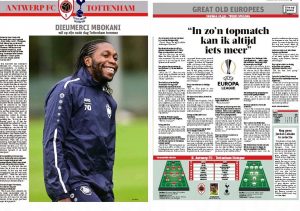 “Before that at Standard, Liverpool wanted to get me. But then I chose Monaco, which in hindsight, was not so smart,” Mbokani explained.

“I would have liked to have made a career in the Premier League. I ended up playing there for two years, but then I was owned by Dynamo Kiev and they didn’t want to sell me.”