Hugo Lloris is a much loved figure at Tottenham as well as for the France national team. Hugely respected at both club and national camp, Lloris has a calm air of authority and gets universal respect from those who play under him.

Lloris’ role as a senior France figure extends beyond that and he’s often speaking to members of his national squad throughout the year, and helping them get along. When the Frenchman signed for Tottenham Hotspur, he had to fight his way into the team, and Florian Thauvin has revealed he encouraged him to continue to do the same at Newcastle United.

Thauvin struggled to impose himself at Newcastle, but things have been very different this season with Marseille. The 24 year old has been playing so well that he’s won a place in Didier Deschamps’ squad, and has subsequently been speaking to L’Equipe.

Lloris got a mention for handing Thuavin some advice after Tottenham played Newcastle last season. Asked if he’d struggle to settle into the France set-up, Thuavin explained: “I 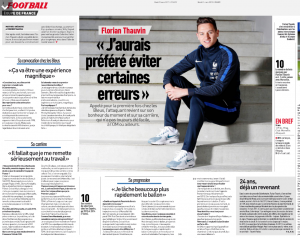 have lots of friends from the time with the selections: Sidibé, Mendy, Bakayoko, Tolisso. There is also Lloris. Last season, he spoke to me after a match between Newcastle and Tottenham. He took ten minutes to tell me not to give up. It had touched me at the time, he was not obliged to do so.”

The Tottenham captain’s character is probably such that he actually felt obliged to do so.