Manchester United signed Guillermo Varela from Peñarol in 2013 and he was the Red Devils’ first signing after Sir Alex Ferguson’s retirement, although he actually arrived before the manager left.

Prior to joining the Old Trafford club, the right-back underwent a trial in May 2013 when Ferguson was still in charge.

Danish newspaper Ekstra Bladet sat for a lengthy interview with the FC Copenhagen defender and he explained how a move to the Premier League club materialised.

“After the U20 Championship, I got a little injury, which is why United wanted to bring me to the club to see me. They would make sure there was no serious injury if they were to offer me a contract,” he said.

“I travelled to Manchester. The atmosphere was good. They had already won the league, although four games were still left in the [2012/13] season.

“The two weeks were a dream. I couldn’t believe I was really there and training with Ferdinand, Giggs, Van Persie, Scholes and all the others.

“I couldn’t say a word in English, but the Spanish-speaking players like Antonio Valencia and Javier Hernández and the Brazilian twins Rafael and Fábio helped me a lot.

“It was mostly Ferguson’s assistants who were on the training ground. He sat in his office and came down the field once in a while and said a few words. Maybe he had already decided to quit, but I don’t think anyone in the club knew it at the time.”

Even though Ferguson announced his retirement in May 2013, Varela believes the Scot had already made a decision to sign him for Manchester United.

“I was Ferguson’s last purchase. It’s a little special to think about,” the Uruguayan explains.

Unfortunately for the 26-year-old, things didn’t work out at United under David Moyes and he was loaned to Real Madrid Castilla for the 2014/15 season. He trained under Zinedine Zidane and the La Liga side wanted to sign him on a permanent transfer for their B team.

However, the deal never materialised and the South American explains the reason behind it. 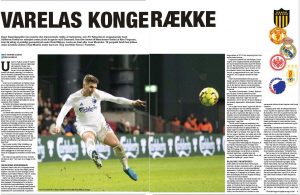 “As I heard, Real Madrid submitted a bid with Manchester United. But United demanded far too much money compared to only having to play for the B team. So Real Madrid weren’t willing to pay,” the player stressed.

Varela spent the following season on loan at Eintracht Frankfurt before United allowed him to re-join Peñarol in 2017 on a permanent deal.