Home Europe “What happens next year will come” – Player cagey on future at...
SHARE

Manchester City allowed Aleix Garcia to go out on loan to Girona last season, where he made only seven starts in the league.

After a disappointing campaign, he was once again allowed to join the Catalan club on a temporary deal earlier in the summer, where he has already made five starts in La Liga.

The midfielder gave an interview to Mundo Deportivo and admitted the arrival of Eusebio Sacristán before the start of the season was crucial for him to make a switch to Montilivi for the second year in a row.

“I said that I would not return to Girona, but the change of coach was decisive,” he explained.

“I will always wish Pablo Machín [former Girona manager] the best, but the arrival of Eusebio and his football was key to being able to return. The good atmosphere of the dressing room and the fans were also key.”

The Spaniard was further quizzed about Pep Guardiola’s plans for his development.

“It was decided that I had to go out, basically because I did not have the option to have minutes and evolve. He recommended me to return to Girona, believed that Eusebio’s football would go very well,” the 21-year-old added.

Garcia’s contract at the Eithad runs out in 2020 and Mundo Deportiv asked him if he dreams of making his way into the former Barcelona manager’s plans at City following his loan spell with Girona. 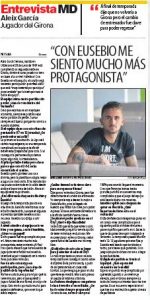 He said: “The most important thing is to think about this season and to get the objective of continuity as soon as possible. from then on we will think of more beautiful things.

“What happens next year will come. Now I only think of helping Girona as much as possible.”