Home Europe Player reveals ‘it would be nice’ to join Barca, but will ‘take...
SHARE

Last week, we carried a report from Mundo Deportivo, who claimed Barcelona are planning a minimum of four signings after having already agreed a deal with Ajax for Frenkie de Jong.

The midfielder’s compatriot and club teammate Matthijs de Ligt, and Antoine Griezmann of Atletico Madrid, are the two priority targets for the La Liga winners in the summer transfer window.

Several reports in Spain and France have suggested that Ernesto Valverde’s side and Paris Saint-Germain are set to battle it for the Ajax captain’s services.

The 19-year-old was a part of the Netherlands squad that lost to Portugal in the UEFA Nations League final on Sunday.

After the tournament, Mundo Deportivo conducted an interview with the 19-year-old, which was published in today’s edition of the Catalan newspaper.

De Ligt, who stressed “it’s an honour” to be linked with top clubs across Europe, was asked if it is a dream for him to play alongside De Jong and Lionel Messi at Barcelona.

He said: “Of course it would be nice, but I also have to see what’s best for me.”

The defender will go on a holiday and will have plenty of time to think about his future, but stressed there has been no timeline set for when he will make a decision.

“I still do not know what my heart says, I have been concentrated all the time in Ajax and in the national team,” the Dutchman explained.

“During my vacations, I will be able to think about it and decide what I am going to do with my future. I do not know when I’ll have it resolved, but I’m going to take my time.”

A move to the Camp Nou will see De Ligt fight with Gerard Pique, Clement Lenglet, Samuel Umtiti and Jean-Clair Todibo for a place in the starting lineup, but “competition is not something that scares” the youngster.

Earlier report claimed De Ligt is demanding a better economic deal to join the Spanish champions, a notion that has been rubbished by the player himself. 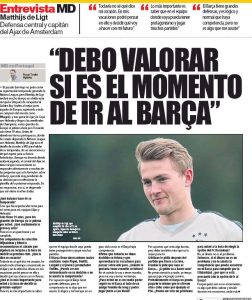 Mundo further question if money and competition are not a problem, why has he not agreed to join Barcelona already.

De Ligt responded by saying, “Because maybe it’s not the time yet. It’s something I should value and decide during my vacations, nothing more.”