“You’re such a coward” Ozil reveals heated argument with Mourinho

Mesut Ozil has got a book out on March 16th, in another perfect example of footballers not really caring too much about timing. With Arsenal in a crucial stage of the season, and Ozil’s own future severely under doubt, the last thing Arsene Wenger will have wanted is a serialisation of a senior player’s hyped up autobiography.

Like it or not, that’s what Wenger is getting, because Bild have been given the rights to serialise it, and if anyone can find juicy stories in a football book then it’s got to be Bild.

To be fair, the German newspaper haven’t had to do too much looking and Ozil’s biography looks to be quite revealing. To kick off Bild have picked out a section about a big argument Ozil had with Jose Mourinho, whilst the now Manchester United manager was at Real Madrid.

Mourinho, like some Arsenal fans in recent times, was unhappy with the effort Ozil was putting in, and decided to give him both barrels.

Ozil claims Mourinho shouted things like “You think two beautiful passes are enough… You think you’re so good that fifty percent is enough.”

To build the drama, the Arsenal player writes: ‘He pauses. Stares at me with his dark brown eyes. I stare back. Like two boxers at the stare-down before the first round. He shows no emotion. Just waits for a response from me. How much I hate him right now. And I love Mourinho actually.’

The argument continued and Ozil eventually threw his Real madrid shirt at Mourinho and told him to put it on.

As some Manchester United players can probably already back-up, such petulance wasn’t going to please Mourinho, who shouted back: “Oh, are you giving up now? You’re such a 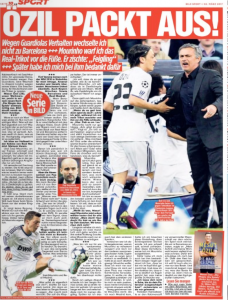 coward. What do you want? To creep under the beautiful, warm shower? Shampoo your hair? To be alone? Or do you want to prove to your fellow players, the fans out there, and me, what you can do.

“You know what, Mesut. Go ahead and cry! You’re such a baby going to take a shower. We do not need you.”

Eventually the player realised Mourinho was right, and has admitted as much in his book, explaining it proved to be a valuable career lesson.

Ozil also claimed that Manchester United tried to sign him when he moved to Arsenal, something which was detailed at the time.