When it comes to getting rid of deadwood, there comes the point when you have to give up and let them go for whatever price that a club is willing to pay.

That’s the situation Everton found themselves in when it came to getting rid of Kevin Mirallas this summer.

The club had made it clear to the Belgian he wasn’t part of their plans having sent him out on loan to Fiorentina last season.

Finding a buyer was not easy, though. Aside from Mirallas being on decent wages, Everton were determined to try and get some fee to bolster their own coffers.

Given Mirallas had hardly shone in the last few years, with just two goals in 30 games for Fiorentina, few were willing to pay much.

In the end, Everton elected to let the 31-year-old go on a free transfer so he could join Antwerp, but it seems that was very much a decision made late in the window, at least as far as Mirallas is concerned.

“I probably could have decided earlier, for example, before the matches against AZ, because I already agreed with Antwerp, but it was delicate with respect to Everton.

“At the beginning of July, they were still asking between six and eight million”, he told Sport/Foot Magazine. 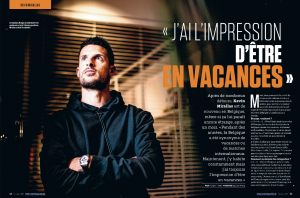 Antwerp were not the only Belgian side to show an interest in Mirallas this summer, with Anderlecht also keen on his signature.

They were starting a new project with Vincent Kompany at the helm, and a Belgian international like Mirallas was the kind of player they were targeting.

Mirallas admits he talked to Kompany about making a move but, after a bit of research, decided it wasn’t for him.

“Yes, he (Kompany) showed me his project,” he added.

“But before signing for Antwerp, I watched all their matches and found that there was nothing in attack.

“Anderlecht has the ball a lot, but nothing happens in the last thirty meters.

“I think (it’s a lack of quality) but more lack of experience in the head of young people who have never played under pressure at this level.

“The fans are calm, but I’m afraid it will not last if nothing changes.”