Nathan Aké and Ferran Torres are so far the only two major signings at Manchester City this summer.

The winger joined the Citizens from Valencia in August, and signed a five-year contract at the Etihad.

Earlier this week, reports coming from Spain claimed Manchester United had also shown interest in the 20-year-old before he agreed to join City.

However, the former La Liga wideman rejected the Red Devils in favour of signing for their local rivals.

Sport interviewed the Spain international, and he revealed the conversation he had with Pep Guardiola was vital in his decision to join the Premier League club.

“He [Guardiola] was key. He’s a coach who knows how to get the best out of each player. This convinced me that it was the best step for my career,” Torres said.

“With Pep as a coach, I can reach my highest level. He told me to come, that I was important for the team and he saw the club as a great place for me. The truth is, from that moment on, I had more than decided.”

City lost Leroy Sané to Bayern Munich, and Torres has been viewed as a replacement for the Germany international.

On this topic, the ex-Valencia star said: “Apart from the fact that he is left-footed and I am right-footed, it may be that we have a similarity in our style.

“He is also a player of being open, facing, one on one against the opponent and helping with goals and assists. In my case, it may be that I am from the right side, [and it] may seem similar to his game.”

Guardiola multiple several star players at his disposal at the English club, but Torres was particularly impressed by one.

“There are fantastic players, but perhaps Kevin De Bruyne is one of those who has impressed me the most. He is a worldwide figure. City are one of the best teams in the world,” the player explained.

“My first impression is to notice and be aware that I must learn from those stars. On the field they will help you to make yourself better, and I, for my part, will do everything possible so that they also perform in the best way.”

City finished the last campaign by only winning the EFL Cup, and lost the title to Liverpool. Torres is of the belief his new teammates are eager to get the title back this season. 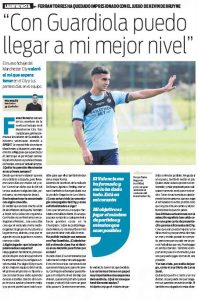 “Liverpool are a very strong team, and they have shown it in recent years. But at the same time, I think we have a group to fight for anything and win the Premier League again,” he added.

“I think the team is ready to win it all, and I see the group really looking forward to the ball rolling again.”

Torres will have an opportunity to make his debut when City visit Molineux to take on Wolverhampton Wanderers on Monday.