Portuguese winger Hildeberto has finally made his debut in Liga NOS this season. Signed by Vitória de Setúbal this summer, the 22-year-old had the first chance to play in his country, having made three appearances for the club so far.

But it doesn’t mean he’s not experienced. Hildeberto has already played in the Championship, in League One and in the Polish League in the past couple of years.

It all happened because he left Portugal very young, when moving from Benfica’s academy to Nottingham Forest back in 2016. He was loaned to the Championship side for one season, having made 25 appearances for the club.

The loan turned out to be a nightmare for him once Nottingham Forest decided not to use him. He only featured in three of the club’s last 20 games in the 2016/17 season. 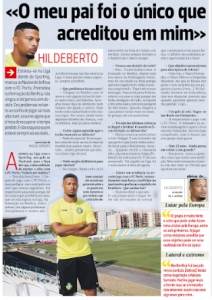 In an interview with A Bola, he talked a little bit about that time when asked if he’s ever thought about quitting football.

“Yes… There were many things. The formation at Benfica, then a good season at Nottingham Forest, but I was put aside in the end because they wanted club players and I was on loan,” Hildeberto told A Bola.

“I did not play for three months. Then I went to Poland, I was overweight because I had turned myself off everything, I recovered and I had an injury with a new three-month stoppage. When I got home, I thought about giving up because I did not feel well.”

But things changed a lot in an year, wand now Hildeberto has the chance to play big games against Sporting and Porto.

“It’s been good (laughs). After the game with FC Porto, my father called me and I felt his voice proud. It was important to me because he was the only one who believed in me, that I would one day play in the Liga. In the Benfica academy, everyone knows, I had some disciplinary problems and many did not believe that one day I would be in the Liga. My father was the only to support, he always believed.”