Home Europe Player ‘should return to Manchester United’ – Decision has been made ahead...
SHARE

We’ve spent most of the season watching the Italian media wondering if AC Milan will try to sign Diogo Dalot permanently from Manchester United at the end of his loan spell.

With 29 appearances so far, the fullback has been used as a rotation option for both of the Rossoneri’s fullbacks, as he’s been doing a job on the right and left side.

Even though there’s still plenty of time for Milan to negotiate his stay, the recent stories from the Italian media sound confident that the club isn’t interested.

We now see two pieces that don’t even consider the possibility of Dalot’s permanence. One of them comes from Calcio Mercato, who when covering AS’ claims of the Rossoneri’s chase for Lucas Vasquez, writes that there’s been a ‘decision’ from the club on not keeping the Manchester United player. 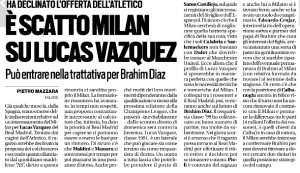 Something similar can be seen in newspaper Tuttosport. They say the options Milan have for fullback for next season should not be enough, especially because Dalot ‘should return to Manchester United’.

The Italian media had many times claimed the Rossoneri would negotiate a fair price with the Red Devils, and that would depend on how well Dalot did during the season. However, the move now sounds practically ruled out, and the player seems to be edging towards a return to Old Trafford.