Last month, we covered Albert Sambi Lokonga’s interview with Het Laatste Nieuws in which the midfielder admitted he dreams of joining clubs like Manchester City or Barcelona.

On November 22nd, another Belgian newspaper Het Nieuwsblad explained the Premier League winners and the Catalan club ‘follow’ the ‘great talent’ and the two clubs have the midfielder on their radar.

The 20-year-old’s contract was set to expire after the end of this season, but he signed an extension at Anderlecht earlier this week. His current deal expires in 2023.

Het Nieuwsblad sat down for an interview with the player and asked him about the likes of City, Barca, Inter Milan and AS Monaco having him on their transfer list, and why he decided to commit his future to Anderlecht.

Responding to that, Lokanga said: “Many clubs inquired, but I didn’t care. Someday I want to aim high. Barcelona? We’ll study that if it ever happens. As a footballer you can never have a lost year.”

Lokonga’s brother Paul-José M’Poku spent three years at Tottenham Hotspur between 2008 and 2011, but that didn’t work out well.

Spurs allowed M’Poku to go out on loan to Leyton Orient for the 2010/11 season and he was then sold to Standard Liège in 2011. 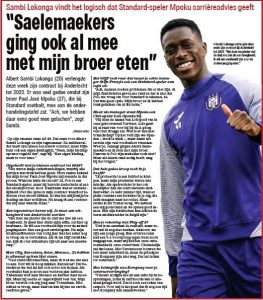 The 27-year-old never made a first team appearance for the north London club and Lokanga wants to avoid repeating the mistakes made by his brother.

“[Youri] Tielemans went to Monaco and had a hard time there. But he undoubtedly learned a lot from it. My brother also left for Tottenham very young. Maybe too early, but that is why he can now give me career advice,” Lokonga concluded.