Nahitan Nandez finds himself on the front cover of Saturday’s edition of Gazzetta dello Sport.

The Italian newspaper is reporting on the player’s expected move from Cagliari to Inter Milan. Currently there’s €2m between the two Serie A clubs when it comes to transfer fee, and that difference is set to be sorted out during an upcoming meeting.

Nandez will move to Inter in a complicated deal, which will involve a paid loan and then a compulsory purchase clause.

There’s an insistence that interest from Leeds United was genuine, and it was the player himself who held the Premier League club away, instead wanting a move to Inter Milan. 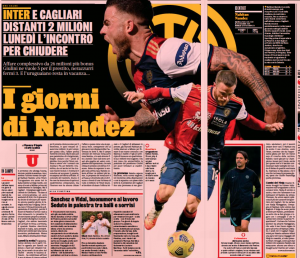 At times it was doubtful whether the Serie A champions could finance a deal, and that may be why the Uruguayan’s agent flirted with Leeds United.