Home Europe Player ‘reserved’ for Manchester City, will leave for less than the release...
SHARE

Ederson’s transfer to Manchester City is kind of becoming a certain thing for the Portuguese media.

In a story from Record, it’s claimed that after the league title, Benfica president Luis Filipe Vieira is starting to intensify the transfer negotiations, especially the sales.

They say that Ederson could be the first player to leave, as Manchester City are known to have had him ‘reserved’ for a while now.

Record also reveals that Luis Filipe Vieira will end up selling the goalkeeper for less than his €60m release clause, which is a new line the Portuguese media are running.

The president has reportedly been in London this week, and they take it as a sign that he could be sorting the details for a sale to Manchester City.

It’s worth recalling that Benfica only own 50% of Ederson’s economic rights, as the 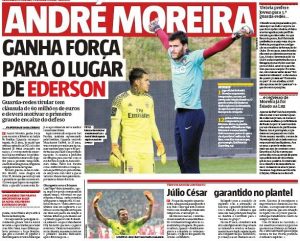 other half belongs to his former club Rio Ave. A few days ago, it was reported that the Eagles had made a ridiculous €5m offer to get Rio Ave’s part, but it was obviously rejected.

Could it be the first move to sort things out before letting him go to Manchester City?