Sometimes when it comes to transfers, all it takes is a word from a manager, and the whole ball starts rolling. For Liverpool and Piotr Zielinski, that may end up being the case.

The Polish midfielder has long been linked with a move to Anfield, with numerous transfer windows now passing in which it’s been suggested he was on his way from Napoli.

That has never happened, but Jürgen Klopp may have set the ball rolling on a potential move in future.

La Repubblica report on the situation at Napoli today and explain Zielinski is one of the players who may be moved on sooner rather than later.

The Serie A side are trying to tie the Polish midfielder down to a new contract, but so far no agreement has been met, with the process described as ‘exhausting’.

While talks are dragging on, he has not missed the sweet talk coming out of the Premier League, particularly from Liverpool.

The newspaper says that Klopp praised Zielinski personally when Liverpool were beaten by Napoli in the Champions League back in September and if the German boss were to continue with such flattery, he would ‘reflect on his future’. 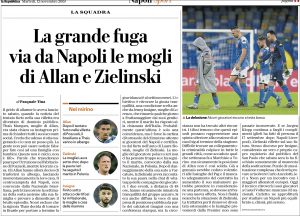 Zielinski is enduring something of a tough time off the pitch after seeing his wife’s car stolen, a situation that she has admitted scared her, and that, plus other factors, could make him look elsewhere.

So far it’s only a hint from La Repubblica that Liverpool would be an option, but given their history, it seems there is scope there for them to get a deal done should they push hard enough.