Cengiz Ünder is enjoying life at Marseille after a disappointing campaign with Leicester City last season.

The Foxes took the winger on a season-long loan deal from AS Roma, with an option to buy, in the summer of 2020.

Ünder was restricted to only 19 appearances across all competitions, which included only one league start. He managed two goals and three assists during his temporary stay at the King Power Stadium.

The 24-year-old also struggled with injuries during his time with Brendan Rodgers’ side. This, coupled with his poor performances, convinced the English club not to make his stay permanent.

After returning to Roma in the summer, Marseille came forward to take the Turkey international on a loan deal. He has scored four goals in six matches for the Ligue 1 side.

L’Equipe have a report detailing the impact made by Marseille’s summer signings. This is where Ünder comes in, and the newspaper states he has ‘recovered well from a failed and injured season at Leicester’. 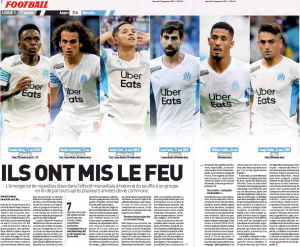 Although Ünder has been on the pitch close to 500 minutes this term, L’Equipe suggest Jorge Sampaoli has used the Roma owned player a lot and he might ‘need a bit of a breather right now’.

Ünder’s poor season at Leicester is behind him and he is now showcasing his qualities for the French club.