Home Europe Player has ‘received call’ from Tottenham about signing for Spurs in coming...
SHARE

Catalan newspaper Sport and France’s L’Equipe are firing claims between them about the future of Andre Onana.

The Ajax goalkeeper clearly feels he’s deserving of transfer interest from the biggest clubs, and the rumours have started to build.

It started off with claims about Marc-André ter Stegen hesitating on a renewal with Barcelona, so the Catalan club would therefore be keen on taking their former player back.

PSG, Tottenham and Chelsea were dragged in, and after L’Equipe covered the situation on Monday, Sport go over it on Tuesday. Onana has ‘received a call’ from Spurs and their London rivals, to find out about the possibility of a summer transfer.

Sport’s slant is that Onana could be signed by Barca if Neto is sold, so he’d be a back-up for Ter Stegen. That sounds a likelier scenario, given the German is very happy at Barcelona and, renewal issues or not, it’s unlikely he’ll be leaving soon.

The Ajax stopper would then be given assurances of some games and a guarantee he could leave in the future for a bigger offer. 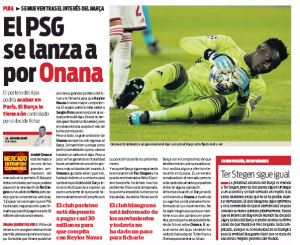 Chelsea giving up on Kepa this summer could be considered rash, and Hugo Lloris still has time left at the top level.

Between the two, it’s Tottenham which would present a better long term future as a number one, however, it’s got to be doubtful they’d invest big in the position this summer.

All of the presented options for Onana look like half chances at best.