Thomas Meunier has signed for Borussia Dortmund as a free agent. With his PSG contract expiring this summer, the fullback had been linked with several clubs, although a move to the Bundesliga side has looked nailed on for weeks.

One of the clubs previously linked is Tottenham Hotspur, and Friday’s edition of L’Equipe explains what went wrong for the potential Spurs transfer.

Meunier ‘received a call’ from Jose Mourinho, and didn’t dismiss the idea of a move to the London club. The prospect of playing in the Premier League appealed to him, and it’s something he’s spoken about on previous occasions.

However, as far as L’Equipe are concerned, the desire from Mourinho and Meunier ‘wasn’t shared by Daniel Levy’, and with him being in charge of Tottenham’s transfer business, that was that. 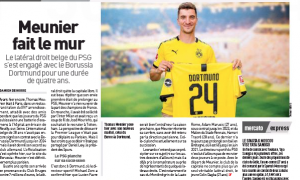 Meunier turns 29 years of age in September, and it’s quite possible Levy was concerned about the prospect of there being no potential to gain a transfer fee down the line. With Mourinho having a history of adding experienced signings, this could be a recurring theme going forward.