There are many cases of players moving to big clubs too soon in their careers, and Anthony Le Tallec is one of them.

Breaking through at an early age in France, the young forward was snapped up by Liverpool in 2002 for £2.25m, but only made 32 appearances during his six years at the club.

The manager who signed him, Gérard Houllier, feels Le Tallec should have ‘spent an extra season’ at Le Havre, because the striker was a ‘diamond in the rough’ and needed more polishing before making the big step.

The player himself admits he is at fault for how things turned out at Anfield for him, that he was too ‘impatient’ in his early years, as is the case with many youngsters even to this day.

He said: “The first season, I was systematically in the first-team group when it was filled with international players. It was magical for me”.

However, despite making 23 appearances, Le Tallec didn’t feel as if he was breaking through, and took a radical step.

He explained to France Football: “I took the decision to ask Rafa Benitez to go out on loan at Saint-Etienne. He didn’t understand since he was playing me in preseason. He said I was crazy, got annoyed and said: ‘If you want to leave, then leave’. He made me pay for it later”. 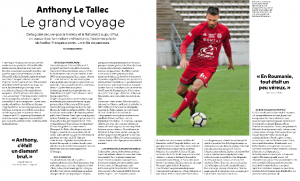 Despite this, Le Tallec returned six months later, is still full of praise for the Spaniard, who allowed him to live his ‘most beautiful memory’: the Champions League victory in 2005.

He stayed at Liverpool until 2007, when he was sold to Le Mans in France.

What followed was a series of transfers around Europe, going to Auxerre, Valenciennes, Atromitos Athen, Astra Giurgiu and US Orléans.

On September 2nd, he signed with FC Annecy in National 2.

‘Because of the costs’ – Club dropping out of race for Molineux star, Wolves an ‘expensive shop’

‘Because of the costs’ – Club dropping out of race for...

Newly promoted side have ‘good chances’ of beating Chelsea and Tottenham...