It was also explained the Premier League sides need a ‘mega offer’ to take the Austria international away from his club this summer.

Operating across various midfield positions and also on the left wing, the 21-year-old finished the last campaign with nine goals and seven assists across all competitions.

Austria were eliminated from Euro 2020 and Baumgartner in the first knockout round,  and the player impressed for his country at the UEFA tournament.

With his form for the Bundesliga side and Austria reportedly attracting interest from Liverpool and Manchester United, the player was directly quizzed on the possibility of joining one of the two English giants this summer.

“I definitely extended my contract in March with the intention of playing here next season. I see the best opportunity here to develop myself further. For me that means: continuous performance at a high level, with even more upward strides,” Baumgartner told SportBild.

At the start of March, the versatile player signed a new contract with the German club and his current deal runs down in 2025.

Baumgartner, meanwhile, has admitted that he looks up to Bayern Munich star Thomas Muller, when asked if his playing style is similar to that of the Germany international.

“My style of play is certainly going in that direction, but I will not compare myself to Thomas Muller, who has won umpteen titles,” he explained.

“I like to watch videos of his goals and assists. And when I watch the Champions League 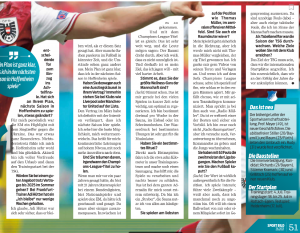 on the sofa, I pay special attention to how cleverly he acts in the narrow spaces. I also like the way he communicates with his teammates.

“He is also referred to as “Radio Muller”. He’s one of the best in the world and certainly a role model. I’m not yet “Radio Baumgartner”, but I also try to take responsibility, give commands and keep the boys awake.”

Agents trying to fix sub-€60m clause on Tottenham target – Could be great deal for Paratici and co.

Agents trying to fix sub-€60m clause on Tottenham target – Could...