Benfica star Darwin Nunez has put Manchester City at the top of is wishlist this summer and is hopeful agent Jorge Mendes can seal it for him.

That’s according to Record, who cover the striker’s future ahead of what is likely to be a busy summer for him.

Nunez has been the star of the show for the Portuguese side this season, scoring 33 goals in 38 games in all competitions, including six goals in ten games in the Champions League.

He’s likely to have a number of suitors because of those numbers, but Record say there are two clubs he has at the top of his preferred options; Manchester City and Atlético Madrid.

They explain that the Spanish side are currently the club who are ‘best positioned’ to secure his signing, having been following him for a long time as they eye up a replacement for Luis Suarez, whose contract is coming to an end. 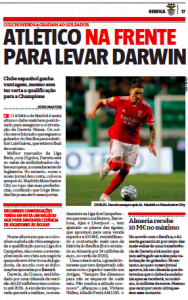 They, alongside Manchester City, are ‘on top of his preferences’, and he is ‘trusting’ that his agent Jorge Mendes can ‘open those doors for him’.

In terms of City, they’re unlikely to push for a deal given their pursuit of Erling Haaland, which seems to be concluding with him heading to the Etihad.

Thus the way is seemingly clear for Atlético to get their way, and talks are already underway on a €100m deal that could even include an exchange of players between the two clubs