Home Europe Club ‘waiting’ for ‘final offer’ from Everton – They may be waiting...
SHARE

Marco Silva has Jordan Pickford as the first choice goalkeeper at Everton and the Toffees further strengthened that position after they agreed a deal to sign Jonas Lössl on a free transfer.

In addition to the duo, Maarten Stekelenburg is another goalkeeping option available for the former Watford manager.

Even with the goalkeeping position sorted at Goodison Park, Sport linked Jasper Cillessen to Everton on June 14th as the Netherlands international is looking for a move away from Barcelona.

A day later, the same outlet explained the 30-year-old is ‘close to signing’ for the Merseyside club.

It was then explained that Pickford is expected to join Manchester United as David de Gea will sign for Paris Saint-Germain.

The claims from Sport didn’t make any sense, especially when Everton already have three players in that position and none of them are seriously linked with a move away from the club right now.

On June 16th, another Catalan newspaper Mundo Deportivo said a source from the Premier League side had told them the claim of a Cillessen move is “a nonsense”.

Rac1 now states the Barca keeper is expected to join Valencia and as a part of the deal, Neto will move to Camp Nou and this was relayed in today’s edition of Sport.

With claims from Mundo suggesting Everton are not interested in Cillessen and Rac1 reporting Valencia could be his next destination. 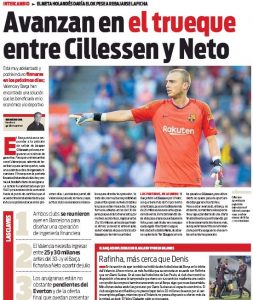 Sport, for reasons know only to themselves, won’t let Everton go. They say Barcelona are still ‘waiting’ for a ‘final offer’ from the club for Cillessen, even though the deal with Valencia is believed to be advanced.