There’s a claim in the French media that West Ham United and Aston Villa are showing an interest in Le Havre defender Harold Moukoudi.

The 21 year old has been receiving attention from clubs across Europe, including the two English sides.

Both West Ham and Aston Villa could be looking to bolster their squads as they go into the second half of the season and the Frenchman looks to be an option.

It’s also claimed Moukoudi was close to a €8m move to England in the last summer transfer window but the club hasn’t been disclosed by L’Equipe. 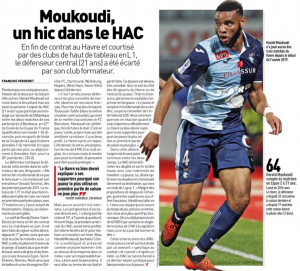 Moukoudi has yet to feature for Le Havre in 2019 dur to his contract situation and the lack of a renewal.

The player is contracted to his club until June 2019 and subsequently can speak to foreign clubs with regards to a pre-contract agreement.

‘Drowned by their own philosophy’ – Liverpool defeat analysed in Spain, not a good night for Jürgen Klopp’s side

Everton and Chelsea have now ‘informed themselves’ about exciting defender –...