Home Europe Player has been ‘proposed to half of England’ – And Wolves have...
SHARE

Marseille had a big plan for the first part of their transfer window.

The aim was to get one big sale, or several smaller ones, done before July to make the club’s 2018/19 accounts look a little better.

It’s been reported for months that this was the plan, and on Sunday L’Equipe reported the club were still trying to achieve it. They’d set agents to work to try and sell Morgan Sanson to a Premier League club, with West Ham the main destination.

They failed to do it in time, and today the French newspaper takes a look at the situation.

Sanson was ‘proposed to half of England’, and three clubs then ‘coveted’ the player. Those clubs are named as Wolves, West Ham and Newcastle United.

Reading between the lines, the Wolves link looks to have been motivated by a 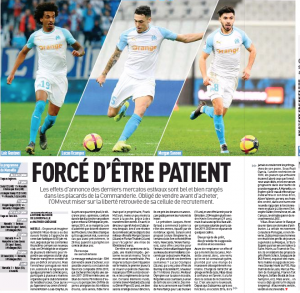 genuine interest in the player, whereas the other two clubs are regular landing spots for one of the agents likely involved.

Despite missing the deadline, Marseille still need to sell and Sanson remains a likely option.

There’s no ‘concrete offer’ and the situation is being made difficult by a ‘fog’ of agents in England, probably the same agents the French club mandated.