Everton and Wolverhampton Wanderers are reportedly two of the clubs who have made offers to sign the FC Porto winger Yacine Brahimi.

The story starts with Correio da Manhã covering the player’s injury, which could leave him out of the match against Benfica.

After several paragraphs about his injury and his recovery, they recall that his contract with the Dragons is expiring at the end of the season, making him a free agent.

That’s when they mention that the player wishes to move to the Premier League, where he’s been receiving offers from a few clubs, with Everton and Wolves included.

The player is said to have ‘proposals’ from both clubs. 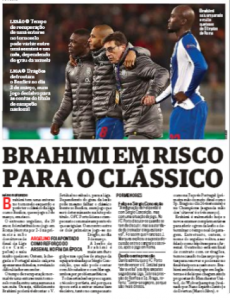 It’s interesting that Arsenal also get a mention, but that goes credited to someplace else, while the claims about Everton and Wolves seem to be from Correio da Manhã.

They even point out the Portuguese managers of the two clubs, Marco Silva and Nuno Espirito Santo, as if that makes a difference.