Home Europe Player is ‘probably’ signing for Leicester and not West Ham, and deal...
SHARE

West Ham fans will be the first to say their club isn’t exactly brilliant at transfers. In recent years there have been some strange negotiations and targets have been lost.

That said, the mess in the Felipe Anderson and Jordan Lukaku transfers doesn’t seem West Ham’s fault. Lazio appear to be completely unreasonable, with claims on Friday they want €70m for the pair, which is so ridiculous it’s funny.

The Hammers have had a questionable role in some of it, with it being claimed they contacted Santos, Anderson’s former club, to ask them to give up the percentage they’re owed, to make the transfer easier. That’s some cheek, if true. 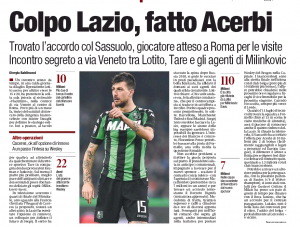 The move to Leicester is expected to happen soon, it’s ‘close’, so Lukaku won’t be going on preseason tour with Lazio.

Leicester have of course been linked before, but this from Il Tempo pushes the track along somewhat.