Andrija Zivkovic being linked to Everton by the English media was always going to create waves in the Portuguese media.

A Bola cover the claims on Sunday in both their newspaper edition and online, with slightly different stories.

It’s made clear the Serbian ‘wouldn’t put any obstacles in the way’ of such a transfer, with him being presented as keen towards the idea of an Everton move.

Benfica themselves would also be pretty keen on a transfer, even in the January window. They’re said to have earmarked the player as someone they can make some cash from, without really impacting upon their current on the pitch plans.

A Bola even say that whilst Benfica would ideally want a straight transfer and a full sale, they wouldn’t close the door to Zivkovic leaving on loan. 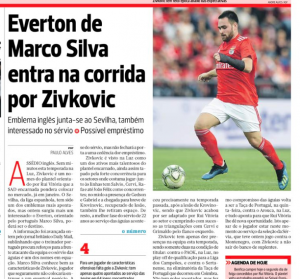 the most, but they have visited over the past couple of years, doing more so when Ronald Koeman was manager of the club.

Even if they had been going every week at the moment, the way Manchester United have done for some time, then they would have struggled to see the 22 year old, as he’s only picked up 78 league minutes over five substitute appearances.