On Saturday, we covered claims from Portugal regarding the future of Andraz Sporar.

A Bola reported the player’s ‘possible destiny’ this summer could be a move to Middlesbrough. Sporting were said to be looking for €6-6.5m to part ways with the striker, and it was thought that would be what the Championship club would be asked for.

Things are moving quickly, as they need to at this stage of the window, and Tuesday’s edition of A Bola says Sporar is ‘preparing to head to England’ to sign for Middlesbrough.

The move is set to be a loan, and there’ll be no fee to pay for that. Instead, Middlesbrough will cover all of the player’s wages and there’ll be a mandatory purchase clause based on conditions.

Should Middlesbrough be promoted to the Premier League, and Sporar play a certain amount of matches, then the transfer will be made permanent for €8.5m. Should that not happen that the mandatory clause becomes optional, and could be renegotiated. 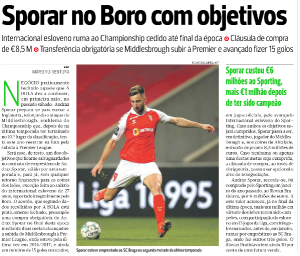 A Bola say the transfer is ‘practically closed’ and there’s clear confidence this one will be happening.

It was at Slovan Bratislava that Sporar really impressed, scoring 12 league goals in 11 matches in the 19/20 season before being signed by the Lisbon club. The previous season he’d scored 34 times in 36 matches, adding nine assists along the way.